Here are 11 substitutes for golden syrup that you can use in your baking.

Want to know the best golden syrup substitutes to use in your baking?

Golden syrup is the star ingredient in many recipes, especially in popular desserts like gingerbread and flapjacks. It’s a classic ingredient sold in many supermarkets and used in many homes throughout the UK.

It has a buttery caramelised flavour and is guaranteed to make any dessert taste great. However, golden syrup isn’t available to everyone, they might not sell it where you live…

But not to worry! Whether you’ve ran out of golden syrup or your local shops don’t sell it, I’ve listed 11 best substitutes for golden syrup.

Some substitutes are better than others, but I’m starting with the best golden syrup substitute you can get…

It’s made by breaking down cornstarch, it’s slightly thinner than golden syrup but has a mild taste that blends well.

Light corn syrup is a great alternative to golden syrup, it’s runnier in texture but adds a nice sweetness. Dark corn syrup can be used If you can’t find light corn syrup, but you might want to check out the other options below.

What Is Golden Syrup?

Golden syrup also known as light treacle is an amber-coloured syrup made by refining sugar cane. It has a light caramel and buttery taste which adds a delicious flavour to many desserts.

It has a thick consistency like treacle, it’s very smooth yet slightly runny (but not as runny as honey).

The most popular brand of golden syrup in the UK has got to be Lyle’s Golden Syrup, that’s the only brand I’ve used ever! It’s vegan, vegetarian, gluten-free and nut-free, so is suitable for many diets.

What Is Golden Syrup Used For?

Golden syrup is used as a sweetener in many dessert recipes and baked goods. Not only does it provide a buttery caramelised sweet flavour, but it also helps with binding ingredients together like in flapjacks and tiffins.

Classic uses of golden syrup include drizzling it over pancakes and porridge.

It’s featured in many of my dessert recipes such as this tasty Malteser tiffin recipe.

Did you know you can make your own homemade golden syrup! It’s easy to make and takes under an hour. If you have spare time on your hands, then this could be the perfect golden syrup substitute for you.

All you need is 3 very basic ingredients and a little bit of time!

How To Make Homemade Golden Syrup

Once the mixture has started to boil, reduce the heat so that the mixture is simmering and squeeze 2 tablespoons of lemon juice and mix.

Leave the mixture to simmer for 40 minutes or until thickened and amber in colour. Remove from the heat and leave to cool for 15 minutes before pouring into a sterile glass jar.

After one hour, screw the lid shut and store at room temperature. This will last you months!

Honey is another substitute for golden syrup, it has a similar texture, colour and it’s very convenient. It’s a natural replacement produced by bees and is said to have many health benefits. Such as helping with hay-fever, coughs and sore-throats.

The type of nectar bees collect effect the taste and texture of the honey. So different brands of honey differ in consistency and taste.

Honey does not taste like golden syrup, so the taste of your homemade desserts will differ. Despite being easy to find, it’s not the best alternative to golden syrup taste-wise.

Agave nectar also called agave syrup is a popular vegan alternative to honey and can be used as a golden syrup substitute too. It’s mild in taste, thinner than honey and sweeter than sugar. Agave nectar doesn’t leave a bitter aftertaste like some artificial sweeteners.

It’s made from many different types of agave plants located in Mexico and south America. You can get agave nectar in many different shades, some which are golden in colour like golden syrup.

As agave nectar has a similar sweetness to golden syrup, it makes a close substitute.

Another good substitution for golden syrup is brown rice syrup. It’s made from brown rice; the starches are broken down and refined into a syrup.

There are actually 3 different types of sugar in brown rice syrup: maltotriose, maltose, and glucose.

It has a slight nutty flavour and a light amber colour. Though it’s not as runny as golden syrup, it’s a good alternative.

Not only is brown rice syrup a good golden syrup replacement, it’s also a popular ingredient used in cocktail bases and to make sweets.

Maple syrup is thick and sweet which makes it a good substitute, it’s similar in colour to golden syrup but is thinner in consistency.

It’s very popular in Canada, it’s drizzled over pancakes, waffles and porridge. Like golden syrup, it has a deep caramelised flavour but is even richer.

The darker the syrup is the stronger the flavour, grade A maple syrup gets you the darkest and strongest flavour you can get.

It’s made from sap within maple trees located mainly in Canada and the US. Maple trees have naturally occurring sugars within. You can get Grade A maple syrup here.

Molasses also known as dark treacle is a sweet, dark syrup made from sugarcane and sugar beet. It’s not as popular in the UK as it is in the US and Caribbean. But it’s actually found in lots of foods like baked beans, beer, gingerbread and sauces.

There are different varieties of molasses, light molasses has a higher sugar content and is sweeter in taste. Avoid using blackstrap molasses, it has an almost bitter taste.

It does add moisture to a recipe but will darken the colour of your bakes and it has a strong flavour. It’s not the best substitute for golden syrup, but using light molasses is an option but it’s hard to get.

Brown sugar is a sucrose sugar: it’s brown in colour, adds moisture and a caramelised flavour to desserts. It’s usually added to cookies to create a chewy texture.

Taste-wise brown sugar is similar to golden syrup but it does not have a buttery taste. The texture is completely different and is an inadequate replacement when golden syrup is used to bind ingredients.

You could mix brown sugar with melted butter (if the recipe uses melted butter) or water to create a liquid texture.

White sugar is made from sugar beet or sugarcane, it’s white in colour and comes in a variety of textures. Caster sugar is finely grounded granulated sugar.

You can use white sugar when golden syrup is added just for sweetness. However, it’s not the best golden syrup alternative, brown sugar would be the better option as it has a caramelised flavour.

Cane syrup is made from simmering sugar cane juice until it forms a dark and thick consistency.

It resembles molasses but has a buttery, sweet flavour. It’s made from sugar cane just like golden syrup but the main difference is the colour.

As cane syurp is quite dark in colour, this can affect the colour of your bakes. This cane syrup is golden in colour but is mainly used for drinks.

Last we have artificial sweeteners, there are so many different types of sweeteners and brands available. Out of all the golden syrup substitutes listed, this would be my least favourite option.

Artificial sweeteners do not taste like golden syrup, they have a completely different flavour. They also tend to be white in colour as opposed to amber or golden brown.

Some artificial sweeteners leave a bitter taste especially when used in large quantities.

But liquid stevia is an option! it’s made from stevia plant leaves and is very sweet in comparison to white sugar. If you use liquid stevia reduce the quantities used, do not use a 1:1 ratio.

To summarise, the best golden syrup substitutes are light corn syrup, brown rice syrup and agave syrup. Using honey as an alternative is convenient when you already have it at home.

If you have the time, making homemade golden syrup is fun, simple and incredibly easy. It will last you months and takes less than an hour to make.

Below are tasty recipes that use golden syrup or alternatives, why not give these substitutes a try with the recipes below (let me know how it goes!) 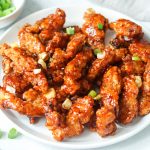 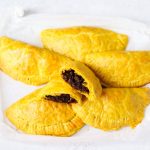