Cinnamon Rolls Recipe (The Best Ever)

Some of the links below are affiliate links, so we may receive a commission at no cost to you, if you make a purchase through a link. Check our Disclosure in the Privacy Policy for more info.

If you’re a cinnamon lover than you’re really going to LOVE this! This easy cinnamon rolls recipe is a winner right here, in fact the best ever. Made in under 2 hours, you’ll be tucking into warm, light and fluffy cinnamon rolls in no time. They’re surprisingly easy to make, the perfect breakfast treat and snack for any time of the day. I’m not kidding when I say this recipe is my dream come true.

Cinnamon rolls are my all-time favourite and my go to snack in cafes, it’s fair to say I’ve enjoyed more than my fair share! But nothing is better than the smell of homemade freshly baked cinnamon rolls. This recipe is so easy for beginners and you can make these cinnamon rolls from scratch by hand, topped with tasty cream cheese icing.

The dough on these cinnamon rolls (also called cinnamon buns) are incredibly tasty and delicious, I add vanilla to the dough to provide extra flavour. One thing I’m not a fan of is working with very tricky yeasted dough, kneading and proofing for hours on end. Luckily for us, this cinnamon roll recipe is so simple and I’ve also included a quick video of how I make them below.

Making cinnamon rolls from scratch with cream cheese icing uses very simple ingredients that you’re likely to have in your house already. No special ingredients or hidden surprises and this UK cinnamon roll recipe is without milk, a standard mixer, bread flour and baking powder. This recipe is just so easy!

Why Is This The Best Cinnamon Rolls Recipe Ever?

When I say these homemade cinnamon rolls with cream cheese icing are delicious, I really do mean it! Incredibly light, fluffy, soft and gooey; each bite just melts in your mouth. The cinnamon rolls have a nice rise when baked and has the perfect amount of cinnamon flavour. I’ve made cinnamon rolls without putting vanilla in the dough and I’ll never do that again. The addition of vanilla really makes a BIG difference.

These cinnamon rolls are very simple and easy to make, using fast action yeast means you’ll only need to proof the dough for just 1 hour. And did I mention this cinnamon roll recipe is by hand, without the need for a standard mixer? Yes, no special tech required here.

How To Make Homemade Cinnamon Rolls From Scratch

Ready to make your own homemade cinnamon rolls from scratch? I’ll take you through this recipe step-by-step with lots of pictures below.

Mix together the flour, yeast, sugar and salt in a large mixing bowl until thoroughly mixed and evenly distributed.

Put the butter and water together in a microwavable safe container and heat in the microwave for 1 minute or until warm to touch. You might see small lumps of butter that has not completely melted, that is fine. You don’t want to overwarm the mixture that it becomes hot to touch.

Pour into the dry ingredients including the egg and vanilla and mix well with a wooden spoon.

Add the rest of the flour to the mixing bowl and mix with a wooden spoon. At this point the mixture will turn quite thick. If your cinnamon roll dough is sticky, then you’ll need to add more flour. Start with adding an extra 50g of flour, if it’s still sticky then sprinkle a handful of flour at a time.

Once the mixture becomes difficult to mix with a wooden spoon, use your hands to knead the dough. Leave the dough to rest for 10 minutes. You’ll notice the yeast starting to do its work as the dough will rise slightly bigger whilst resting.

After resting, roll the cinnamon roll dough into a rectangle shape. Spread your butter all over the dough and sprinkle the brown sugar then cinnamon on top. Pat the mixture down using the palms of your hands.

Roll the cinnamon roll dough like a swiss roll, once rolled it will look like a log. With a sharp knife or a piece of string like in my cinnamon roll recipe video above. Cut the dough into 12 even-sized slices and place in the baking tray.

Leave the dough to proof for an hour, you’ll see the dough rise in size. After proofing the cinnamon rolls for one hour, preheat your oven to 180°C, gas mark 4, 350°F and bake in the oven for 25 to 30 minutes or until the dough is cooked.

Below is a picture of the cinnamon roll dough before proofing:

Below is the cinnamon roll dough after proofing:

My Go-To Tips For Making The Best Cinnamon Rolls

Don’t overheat your butter and water: When warming your butter and water it should not be hot to touch but warm. Hot liquids will kill the yeast resulting in your cinnamon rolls not rising and a cool liquid will not activate the yeast. If you’re unsure, dip your finger inside the mixture; if it’s nice and warm then it’s good to go if not leave to cool down. To be on the safe side, you can microwave the mixture in 15 second intervals.

Want to play around with this recipe and add in your favourite ingredients? How about adding… 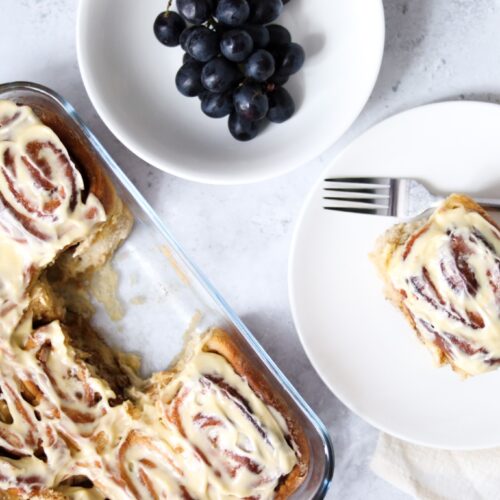 Homemade Cinnamon Rolls – The Best Ever 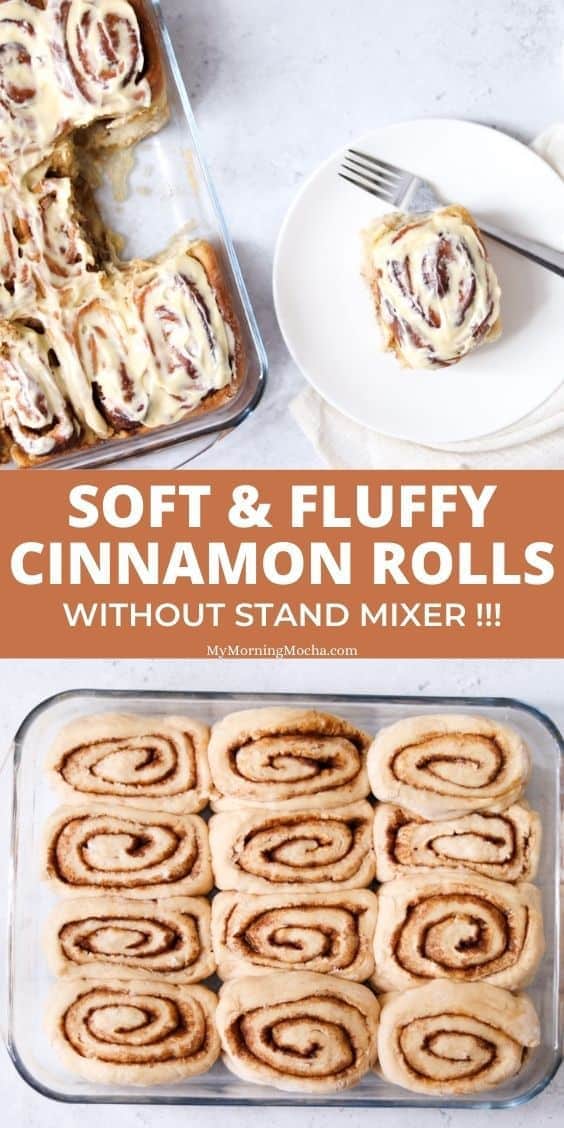 I hope you enjoyed my best easy cinnamon rolls and icing recipe. Have you tried this cinnamon rolls UK recipe? Let me know in the comments below and tag me on Instagram @MyMorningMocha, I would love to see it!